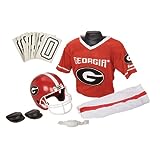 I bought this for my 2 1/2 year old son for Christmas. I was a little worried that it might be too big. My son hasn't worn the pants at all yet. They might be a little big, but I figured I could make them work. The jersey actually fits great! He was so… Read more

“Made a little boy super happy”

We bought this for my almost six year old son for his Halloween and football birthday party costumes. It arrived faster than was estimated in the tracker, which is always nice. I ordered him the Medium which is supposed to be size 7/8 I believe. He is… Read more

Teams in order of appearance (with exception to Vermont and BYU, and UMKC, they are fictional):

- Minnesota State "Bulls" -
I use this team when I want two Minnesota schools in my particular dynasty. Thought about Screaming Eagles (from Coach fame), but opted for an different color scheme and mascot. I still name the coach Hayden Fox though.

- Samoa "Storm" -
Well, I figured Hawaii needed another team to pair up with the Pacific.

- National "Senators" -
I thought the whole country needed a school with a football team, besides military academies.

- Alaska "Eskimos" -
No I-AA teams from this state, so I had to make one. This school had my only snowed game that wasn't in exhibition mode.

- Empire State "Yankees" -
A star-studded team that has a hall-of-fame roster (which I will post eventually...). Located in upstate NY.

- Milwaukee "Cheese" -
Wanted another team in Wisconsin, but didn't like the sound of "Wisconsin State". One of my favorite color schemes - green and dark yellowish orange.

- New York State "Hawks" -
One of the first created teams I made for NCAA 2004. Tired of having Syracuse being the only school representing New York state. Rival to Empire State.

- Huntsville "Rockets" -
It was either UAH Chargers or a fictional school. I chose the latter.

- Cal-Orange "Surfers" -
I figured Orange County needed a I-A school again. I know there is UC-Irvine, and Fullerton State, but I like this name better. I also made a school called the "Western Pioneers" in the Inland Empire region, but it didn't make the vid, evidently.

- Tahiti Tech "Treats" -
Originally the Sharks, with the color scheme of Samoa, but when I made Samoa I changed the scheme and name. Named after a certain soft drink and a school name mentioned in Saved by the Bell. (The team is tough enough to be scary in pink.)

- Guntersville Tech "Mauling Ogres" -
My brother made this school. He made it as a joke school. Guntersville's a small lake town in North Alabama.

- Newfoundland "Vikings" -
The only Canadian created school to make this video. I made at least one school for every province. As all other schools, I put this in the closest state to the province (Maine), since loading up Canada with schools was a bad idea. Not enough recruits, and too big of a region.

- Pacifica "Gold" -
A school from the fictional state "Pacifica", which is basically current Southern California.

- Seattle "Orcas" -
I sometimes want a Washington school in a conference besides the Pac-10, and EWU just wasn't cutting it.

- Kansas City "Kangaroos" -
UMKC is a real school, and their mascot really is the "Kangaroos", but the rest was just a custom job based loosely off of the Kansas City Royals' colors.

- Albuquerque Comets -
Basically a replacement team for New Mexico. Used when I want to put them in another conference. I made similar teams to replace Utah (Deseret "Buccaneers"), Arizona State (Arizona Tech "Phoenix"), and UNLV (Nevada State "Yufos"). I never like using the NCAA logos on custom teams, so I just make a fake team with similar colors in the same location. (see custom BYU and how there is no helmet logo)

- Atlanta Peaches -
I made this school to basically replace either Georgia Tech or Georgia. I didn't like how the rival schools were in different leagues, and NCAA games won't let you move real I-A teams between leagues.